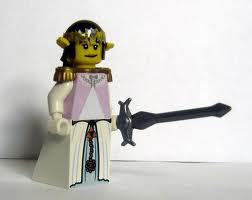 "I had a dream... In the dream, dark storm clouds were billowing over the land of Hyrule... But suddenly, a ray of light shot out of the forest, parted the clouds and lit up the ground... The light turned into a figure holding a green and shining stone, followed by a fairy... I know this is a prophecy that someone would come from the forest... Yes, I thought you might be the one... Oh, I'm sorry! I got carried away with my story and didn't even properly introduce myself! I am Zelda, Princess of Hyrule."
— Princess Zelda

Zelda, Princess of Hyrule, best known simply as Princess Zelda (ゼルダ姫 Zeruda-hime) is the name for several female members of Hyrule's Royal Familywho play an integral role in the history of Hyrule. Though each is the titular character of the Legend of Zelda series, the actual player character is each era's respective Link.(Note: It has not been confirmed as to weather or not each Legend of Zelda game has a completely different person each named Zelda, or if it is a reincarnation of the same Zelda throughout the games.)

Zelda is depicted as a kind and benevolent ruler. As the holder of the Triforce of Wisdom, she is wise beyond her years, and intelligent enough to rule her people. She always wishes to do what is right for her people and is extremely self-sacrificing. Though not always capable of defending herself or her people on her own, Zelda is willing to use any means necessary to aid her allies to achieve those ends, no matter the cost to herself.

Zelda is portrayed as a young girl or beautiful young woman, usually with blonde hair. In Twilight Princess, however (and therefore in Super Smash Bros. Brawl, in which her appearance is based off of that of Twilight Princess), she is depicted as a brunette. She also has light brown hair in The Legend of Zelda: A Link to the Past, and auburn hair in The Adventure of Link. She often wears jewelry such as ornate earrings, as well as a royal gown of white, pink, lavender, or another pale color (red in The Adventure of Link), usually bearing the Royal Family's crest. 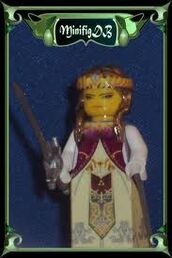 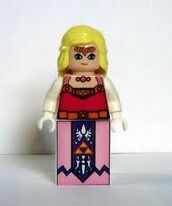 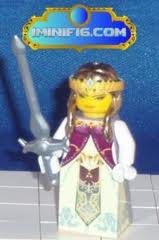 Princess Zelda Minifigure (Professionally made)
Add a photo to this gallery
Retrieved from "https://legolegendofzelda.fandom.com/wiki/Princess_Zelda?oldid=4488"
Community content is available under CC-BY-SA unless otherwise noted.