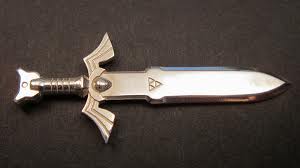 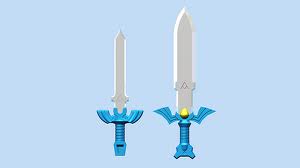 "The Master Sword is a sacred blade which evil ones may never touch.... Only one worthy of the title of "Hero of Time" can pull it from the Pedestal of Time...."
—Rauru

The Master Sword (Masutā Sōdo), also known as the "Blade of Evil's Bane" and the "Sword of Time", is a recurring sword in the Legend of Zelda series. It is imbued with the power to vanquish evil. In many games, it is said to be the only sword capable of defeating the malevolent. Ganondorf and his demonic alternate form, Ganon. It is directly related to the legend of the Hero of Time and has become one of the most iconic symbols of the Legend of Zelda series, often appearing in other video games. Additionally, the Master Sword has been featured in several Zelda games' logos.

According to The Legend of Zelda: Skyward Sword, Hylia created the Goddess Sword so that her chosen hero could one day destroy Demise if he ever was resurrected. When this sword is bathed in three sacred flames, it was forged into the Master Sword. After its creation, the Master Sword was embedded into an enchanted pedestal, and the great Temple of Time was built around it. Ultimately, the sword and pedestal were both sealed inside a private chamber protected by a mighty stone barrier. Only one worthy of the title of "Hero" could pull the sword from the pedestal and unlock its true power. For many ages, the Master Sword lay hidden in its chamber, awaiting the time when the Hero spoken of in the prophecy would come to claim it.

During The Legend of Zelda: Twilight Princess, Princess Zelda states that the Master Sword was crafted by the wisdom of the Ancient Sages. However, no sages are shown having a role in the sword's creation during Skyward Sword.

The Master Sword is a double-edged longsword with no fuller and a purple or blue hilt, although in The Legend of Zelda: A Link to the Past, the hilt is golden. The sword's crossguard is noticeably large and elaborate in relation to its pommel, and is reminiscent of the seal of Hyrule's Royal Family. The blade possesses a ricasso, although Link is never portrayed using it. The Triforce is engraved on the base of the blade, and embedded in the crossguard is what appears to be a yellow gemstone.

In The Legend of Zelda: The Wind Waker, the state of the gem and crossguard seems to be indicative of the sword's power; when Link first acquires the unawakened Master Sword, the gem in its crossguard is dark, and the guard itself seems to have retracted toward the grip. Only once the sword has been restored to its full power does its hilt regain its signature appearance, and its blade again radiates a mystical light. This theory is reinforced in The Legend of Zelda: Skyward Sword, during the forging of the Master Sword. The Unpowered Master Sword and the Fully Powered Master Sword have a retracted and an outstretched wing crossguard, respectively.

More than mere steel, the Master Sword holds the power to repel those aligned with evil. The magic of the Master Sword also seems to prevent it from ever being physically damaged. In The Legend of Zelda: Twilight Princess, the Temple of Time falls into ruin over the centuries, but the Master Sword and its pedestal both appear untouched by the ravages of time when Link discovers it in the Sacred Grove.

Additionally, the Master Sword sometimes holds the power to unleash a mighty beam to smite enemies. It also has the ability to release the power of the Bombos, Ether, and Quake Medallions seen in The Legend of Zelda: A Link to the Past. The Master Sword also seemingly protects its user from evil auras, curses, and transformations. After obtaining the Master Sword in Twilight Princess, Link is no longer involuntarily transformed into his wolf form, except under the influence of the Shadow Crystal Fog within the Palace of Twilight.

The Master Sword also has the ability to dispel magical barriers that other weapons and items are ineffective against. In The Legend of Zelda: A Link to the Past, Link must use the Master Sword to destroy the barrier blocking the entrance to the top level of Hyrule Castle to progress through the dungeon, and confront the evil wizard Agahnim. In The Legend of Zelda: The Wind Waker, Link finds himself trapped in a magical barrier that encompasses all of Hyrule Castle. A single strike with the Master Sword causes the entire barrier to shatter like glass. 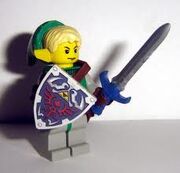 Link equipped with the Master Sword

Basic Brick-made Life-size Master Sword
Add a photo to this gallery
Retrieved from "https://legolegendofzelda.fandom.com/wiki/Master_Sword?oldid=4502"
Community content is available under CC-BY-SA unless otherwise noted.